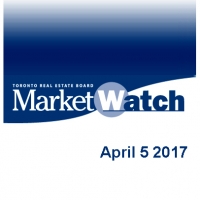 April 5, 2017 -- Toronto Real Estate Board President Larry Cerqua announced that Greater Toronto Area REALTORS® reported 12,077 residential sales through TREB's MLS® System in March 2017. This result represented a 17.7 per cent increase compared to the 10,260 sales reported in March 2016. For the TREB market area as a whole, annual sales growth was strongest for condominium apartments and detached houses.

The number of new listings also increased on a year-over-year basis, at 17,051 – a 15.2 per cent increase compared to March 2016. The strongest growth in new listings was experienced in the detached market segment. While new listings were up strongly compared to last year, the rate new listings growth was still lower than the rate of sales growth. As a result, GTA market conditions continued to tighten.

"It has been encouraging to see that policymakers have not implemented any knee-jerk policies regarding the GTA housing market. Different levels of government are holding consultations with market stakeholders and TREB has participated and will continue to participate in these discussions. Policy makers must remember that it is the interplay between the demand for and supply of listings that influences price growth," said Mr. Cerqua.

Strong competition between buyers continued to cause high levels of price growth in all major market segments. The MLS® Home Price Index (HPI) Composite Benchmark Price was up by 28.6 per cent year-over-year. For the TREB market area as a whole, the average selling price was up by 33.2 per cent, with similar annual rates of growth in the low-rise and condominium apartment segments.

"Annual rates of price growth continued to accelerate in March as growth in sales outstripped growth in listings. A substantial period of months in which listings growth is greater than sales growth will be required to bring the GTA housing market back into balance. As policy makers seek to achieve this balance, it is important that an evidence-based approach is followed," said Jason Mercer, TREB's Director of Market Analysis.