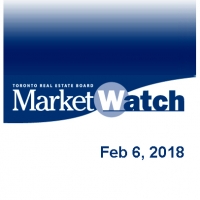 February 6, 2018 -- Toronto Real Estate Board President Tim Syrianos announced that Greater Toronto Area REALTORS® reported 4,019 residential transactions through TREB's MLS® System in January 2018. This result was down by 22 per cent compared to a record 5,155 sales reported in January 2017.

"TREB released its outlook for 2018 on January 30th. The outlook pointed to a slower start to 2018, especially compared to the record-setting pace experienced a year ago. As we move through the year, expect the pace of home sales to pick up, as the psychological impact of the Fair Housing Plan starts to wane and home buyers find their footing relative to the new OSFImandated stress test for mortgage approvals through federally regulated lenders," said Mr. Syrianos.

The MLS® Home Price Index Composite Benchmark was up by 5.2 per cent year-over-year. This annual rate of growth was driven by the condominium apartment market segment, with doubledigit annual growth versus the single-family segment, with prices essentially flat compared to last year. The overall average selling price was down by 4.1 per cent year-over-year to $736,783. This decline was weighted toward the detached segment of the market. In the City of Toronto, the average selling price was up for all home types except for detached houses.

"It is not surprising that home prices in some market segments were flat to down in January compared to last year. At this time last year, we were in the midst of a housing price spike driven by exceptionally low inventory in the marketplace. It is likely that market conditions will support a return to positive price growth for many home types in the second half of 2018. The condominium apartment segment will be the driver of this price growth," said Jason Mercer, TREB's Director of Market Analysis.